We walk through how now.gg helped State of Survival achieve 2000 daily active users and remove barriers to penetrate into a deeper market in the mobile gaming industry.

As the mobile gaming community grows in size and stature, users need modern technology to help solve the issues they regularly face on their mobile devices. now.gg has helped in solving a lot of it with its cloud computing technology. This tech allows gamers to play their favorite mobile games anywhere, on any device, at the click of a button, and with no requirements of having to download, install and continuously update the respective games.

The developers and publishers though are the real winners. They face multiple challenges in this growing market. With competition increasing, companies have to be more aggressive in marketing their game, which means the cost of acquiring new users is bound to go up as well. Users also are privy to several alternative options of games in the market, which is a risk for developers trying to keep their games relevant for as long as possible.

There are plenty more barriers that now.gg helps remove for developers and publishers, with the success of State of Survival being proof of the same.

State of Survival is a zombie-based strategy game published by FunPlus International and released in 2019. State of Survival is a flagship title for FunPlus, which dived into the mobile gaming market with this zombie survival game. The aim is for players to build a PvP army while growing and protecting their own establishment.

Key Focus Areas: Taking a Top Game to the Next Level

Intense competition: With the gaming sector growing exponentially, the competition increased. This meant that the companies were actively trying to grab the same set of eyeballs. As the market was flooded with more titles, FunPlus required newer ways to market and increase State of Surivial’s visibility. Increased visibility meant new users, longer life of the title and more traffic.

Reaching new users: With an already high Daily Active User count, FunPlus needed a new way to increase its reach and user base. User retention was also an important aspect of maintaining the DAU.

The publishers were looking to build a userbase of loyal players who are willing to spend time inside the game and its servers, thus ready to grind the game out.

High Cost of Acquisition: FunPlus also had to deal with a potential increase in customer acquisition costs, with further rigorous marketing required for the same amount of visibility, thanks to the increased competitors in the same genre.

Increased Visibility: now.gg ran a global campaign in January 2022 and offered State of Survival a platform that addressed all the points. Improved visibility was achieved now.gg’s SEO presence. Add to that, the ability to share and play a game with just a click along with the removal of device limitations helped State of Survival to tap into more users. now.gg’s cloud tech also helped remove some geographical restrictions that prevented the game from penetrating certain markets or a certain portion of the target audience.

Lower Cost Per Impression: now.gg also provided free game publishing on the cloud, which is another contributor towards visibility along with a lower user acquisition cost and CPI.

The cloud payment solutions that now.gg provided removed the dependence on other app distribution services for in-game purchases. This saved FunPlus a considerable sum on transaction fees as now.gg charged a much lower rate (5% vs 30%) compared to what they had to pay for the in-game purchases.

Community Involvement: The user retention rate was improved by increasing community involvement through the ability to create MODs of the game on now.gg. Equipping users with the ability to stamp their own imprint on State of Survival also helped FunPlus achieve its target userbase of loyal players who are ready to grind it out and become a larger part of the game’s community. 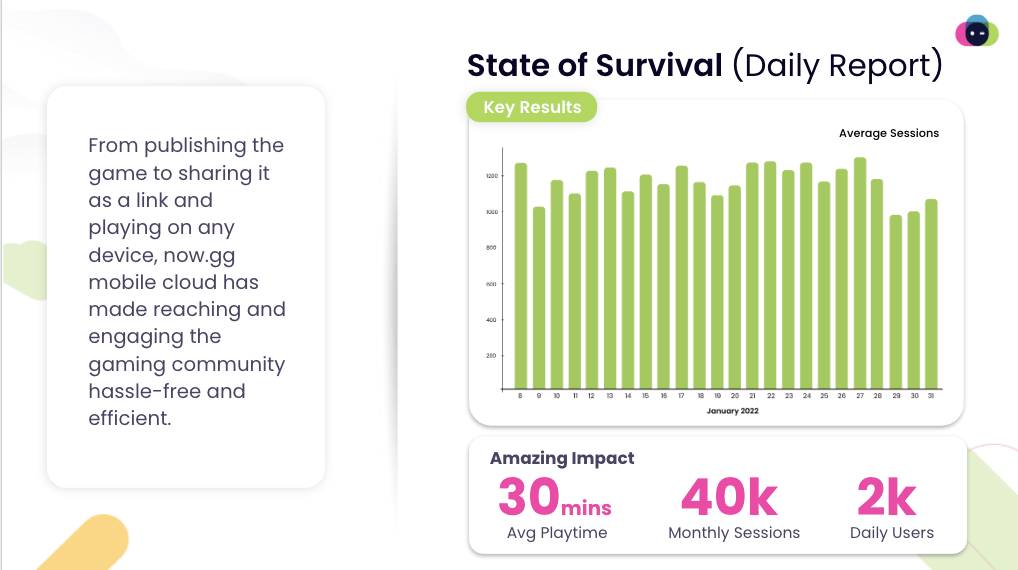 now.gg removes the complexities surrounding playing the game by allowing users to play it without the need to download, install or incur any storage for the respective title, thus increasing the potential market and traffic. The cloud payment solutions remove the reliance on in-game purchases, thus helping developers escape the high transaction fees they have to incur.

To add to it, users can share game links and MODs easily at the click of a button. This allows for free promotion along with the cross-device function that enables users to play with friends and others irrespective of their device. now.gg also allows users to customize their favorite games through the Creator Studio and Creator Hub, a feature that has been prevalent in the PC industry for more than a decade. This provides a boost to the life of the game by increasing user retention through new content over and above what is provided by the developers.

The partnership between now.gg and State of Survival proves that mobile cloud computing solutions are going to drive the future of mobile gaming today.