How to Decide if a Mobile Cloud Solution is right for your Game?

Know how to gauge why a mobile cloud solution is the ideal platform for your game.

The early onset of modern mobile games was a simple world, with developers not having to think about a multitude of factors before deciding to release it on their chosen platform(s). However, as mobile games became mainstream, platforms began imposing regulations and exercising certain practices that have added a tinge of complexity to this entire process.

The advent of mobile cloud technology has provided a huge boon for the mobile industry. The mobile cloud allows users to play mobile games on remote servers, thus ushering in the future of gaming.

However, developers now have another platform to consider while preparing to release their games. Here are a few factors that help developers make the decisions as to whether a mobile cloud solution is a way to go when it comes to their games.

The mobile gaming market is certainly growing and far from being saturated. However, there are multiple games in each genre that have a lot of similarities owing to the mechanics of the genre and some legacy platforms already have a few at the top or highlighted.

Developers might have their upcoming title belong to a genre that already has multiple titles with similar mechanics. In such a situation, their game might suffer from a lack of visibility on the legacy platforms.

In such a situation, a mobile cloud solution makes things simple for developers. Cloud systems like now.gg allow users to play the game at the click of a link and also invite others to play the same with an easily shareable link. This enhanced shareability removes the visibility problem for the developers. The free promotion angle is also an added bonus, with developers also able to share the game with the click of a button on the title’s website, thus reaping rewards from the same.

In case a developer is releasing their game with the freemium model, the free-to-play market will be accessed in a much more diversified manner through mobile cloud technology. The in-app purchases can be simplified and streamlined through the mobile cloud, which helps in removing limitations of payment services offered by the game or legacy platforms themselves.

To add to it, since the game doesn’t require a fee to play it, the casual gaming market can be tapped into, with the shareability and ease of access factor that a mobile cloud-like now.gg provides. Users can try the game out without much research into whether the game will run on their device and its other requirements and that widens the game’s reach.

Mobile clouds like now.gg also allow developers to create alternative sources of revenue through their NFT Marketplace, resulting in an integration of the blockchain technology with their titles as well. 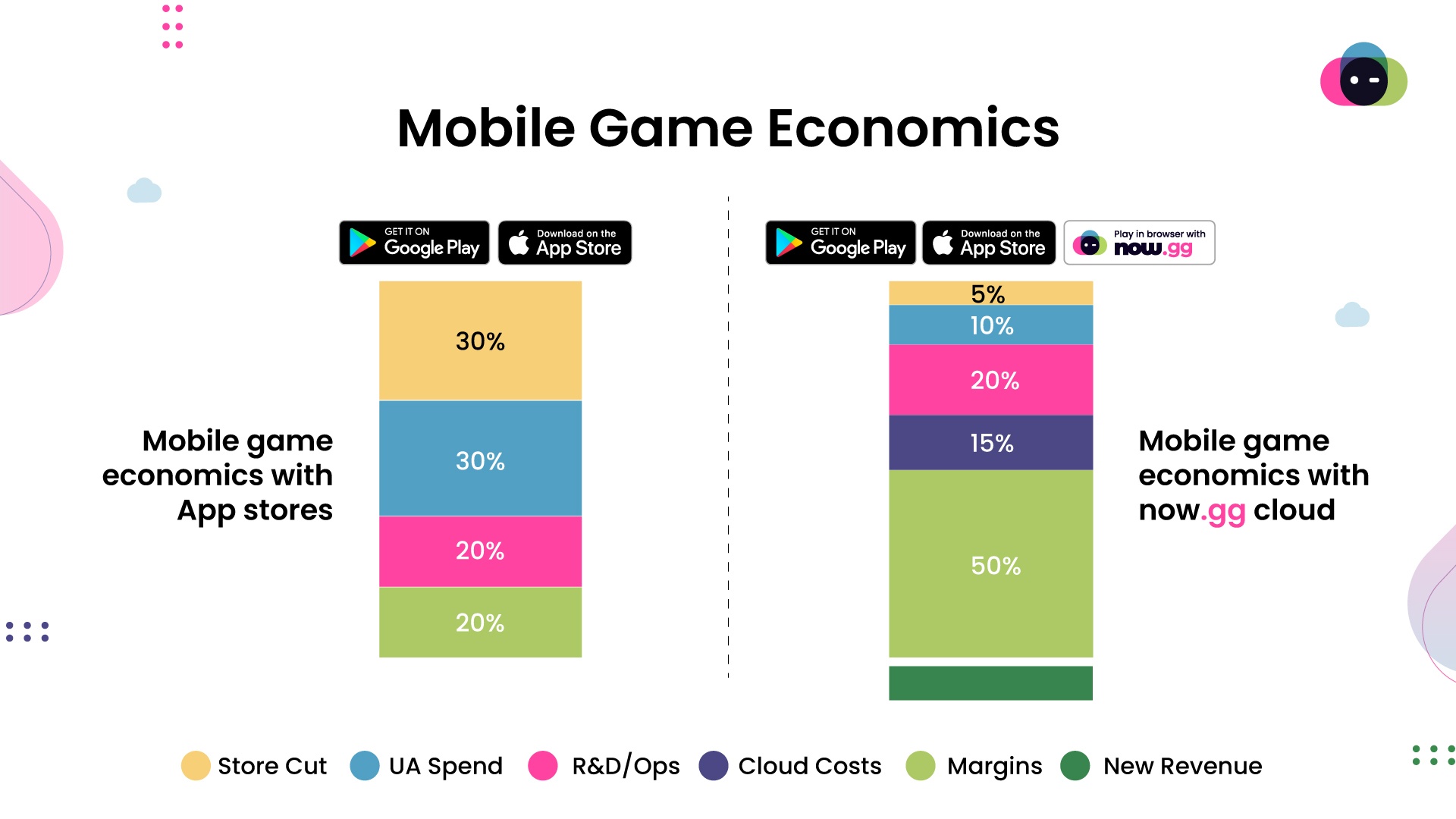 When it comes to games following the freemium model, the entire revenue is dependent on in-app purchases. The cost of user acquisition in that case, apart from marketing cost, is the transaction fees inflicted upon them by platforms they release their game on. Legacy platforms may charge up to 30% in transaction fees, which can be quite heavy for developers.

However, mobile cloud technologies like now.gg offers the same services at just a cost of 5% while also offering much more in terms of services compared to legacy platforms. The 25% differential can be huge for small developers and allow them to survive and thrive in this competitive market.

Now.gg also has its own cloud payment solutions that streamline the in-app purchases and microtransactions, allowing users to also integrate cryptocurrencies and use the same as payment on the cloud.

A developer does his own side of extensive research before releasing a game. The betas and testing programs allow developers to calculate who their target market, target user, and demographic are going to be.

In the case of games that appeal to a youthful audience, it would be prudent to go for a mobile cloud solution as it removes hardware encumbrances to a large extent, allowing users to play games on their own mobile devices, irrespective of their software version and other factors. The casual gaming market will also find it easier to try out games that they can access freely at the click of a link or a button rather than go through the cumbersome process of downloading and installing the same. A mobile cloud solution lessens the commitment necessary from the users in order to gain access to the game and that can really benefit developers.